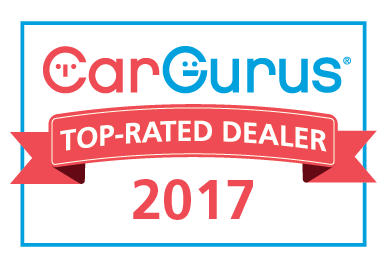 LONDON, ON, July 19, 2017 – CarGurus, a leading consumer automotive car shopping website, today announced it has named Competition Toyota a “2017 CarGurus Top Rated Dealer.” This marks the first year CarGurus is presenting the awards in Canada after launching the program in 2015 among U.S. dealers. The CarGurus Top Rated Dealer awards are given to a select group of car dealerships that have received the highest average ratings from shoppers who have submitted dealership reviews on the CarGurus platform. CarGurus uses shoppers’ dealership ratings as well as comprehensive valuation analytics to help shoppers search their local marketplace and find great car deals from top-rated dealers.

“We are thrilled to recognize Competition Toyota as a Top Rated Dealer,” said Sam Zales, President of Dealer Operations. “Based on CarGurus’ shoppers’ ratings, it is clear that the team at Competition Toyota is delivering a superior car shopping experience for their customers, and we applaud their high standards for excellence.”

“It’s a true honor being named a Car Gurus Top Rated Dealer , the quality sales and service we provide along with a great brand and great Team here make this type of recognition very special to us all.” said Kevin Laurie, General Manager. “We take pride in delivering an experience that exceeds our customers’ expectations , and with our new facility on the horizon we feel the added inventory , space and ability to meet our growing clients base will service London and the surrounding area even better.”

CarGurus invites shoppers to review and rate dealerships with whom they have interacted during their car shopping experience. Dealer ratings and reviews are visible to the public on the site, and they are also factored in the algorithm that CarGurus uses to rank search results for shoppers.  According to recent CarGurus poll, 78% of shoppers say they will not buy a car from a dealership without first seeking out reviews of that dealer from other shoppers.

Founded in 2006 by Langley Steinert, co-founder of TripAdvisor, CarGurus (https://ca.cargurus.com) is a leading online automotive shopping website focused on bringing trust, transparency and efficiency to the car research and shopping experience. The site uses technology and market data analysis to help millions of automotive shoppers search for cars and quickly identify the best deals from top-rated dealers in their local area. Today, in the United States, the site serves 23 million unique monthly users and more than 22,000 subscribing dealers, and ranks #1 among car shopping websites in the U.S. by daily unique visitor traffic (ComScore Media Metrix*). CarGurus launched its Canadian site in 2015 and also operates sites in the United Kingdom and Germany.