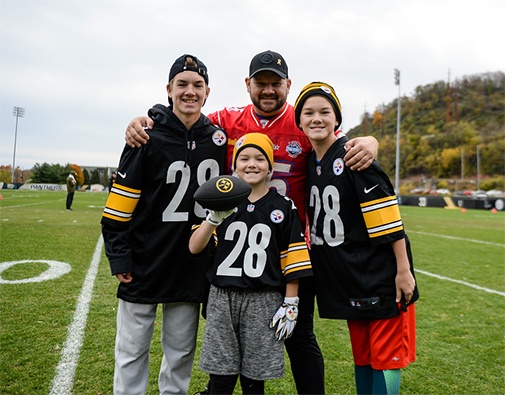 Joey Murray has overcome more hardships throughout his mere nine years of life than most of us will ever have to.

The fun-loving and active young boy from Ingersoll, Ontario was diagnosed with acute lymphoblastic leukemia in 2013 at just four years old. As if this news was not tragic enough, Joey’s mom, Doretta Murray was hospitalized due to a stress seizure just one week after her son’s diagnosis.

After coming out of the medical coma in which she was placed, Doretta was deemed to be on the road to recovery. In a tragic turn of events that no one could have predicted, Joey’s mom ended up passing away as a result of the severe brain damage she had suffered throughout the incident, less than a month after the boy’s initial diagnosis.

With his wife and the mother of his children suddenly gone, a very sick little boy to care for, and two other young sons to raise, Joey’s dad, Scott Murray needed a miracle.

Joey was eventually hospitalized at the Children’s Hospital of London Health Science Centre. Even while he endured over three years of cancer treatment, hospital staff described the young boy as energetic and upbeat; his positive attitude never faltered.

Scott received his much-needed miracle when the news broke that his son had entered into clinical remission or as Joey liked to say, he “kicked cancer’s butt!”

However, the family’s long overdue reception of good fortune did not stop there.

As Joey was still learning the ropes and adapting to the changes that were born of his cancer diagnosis, his family helped him to make a request with Southwestern Ontario’s Make-A-Wish Foundation. The organization works to grant children with life-threatening diseases one wish of their choice; fundraisers and sponsors contribute to cover all associated costs.

For Joey, the wish that he would ask to have granted by the association was a no-brainer. The Murrays are a huge football family; all three boys were raised with a passion for the sport. The family’s favourite team is the Pittsburgh Steelers. In fact, many photos depict Joey as a newborn dressed in Steelers onesies and tiny hats.

When asked to describe their level of commitment to the sport, Scott said the following: “It’s a big thing in our house. We have our faith and our football.” Joey’s dad has even managed to combine his passion for football with his career; he serves as a football coach at the Ingersoll District Collegiate Institute.

With all of that being said, no one was surprised when Joey wished for the opportunity to have the ultimate Pittsburgh Steelers experience alongside his dad and two brothers, T.J. and Riley.

At around the same time, our team at North London Toyota had registered to act as a partner with the Make-A-Wish foundation and provide the necessary funds to make one child’s wish come true.

As luck would have it, we were matched up with Joey and quickly embarked on our journey to grant the child’s wish. By taking a small amount of the profit from each of our sales, we were able to cover the expenses of Joey’s Pittsburgh Steelers experience by the time the holiday season began.

Around the same time, Joey had been invited to perform the opening kickoff at a Western University football game. Little did the boy know, there was a much bigger surprise in store for him that evening.

Just as Joey completed his kick, he turned around to see Kevin Laurie, the owner of NLT, his own son Eric, and representatives from Make-A-Wish standing behind him with a banner that read “YOU’RE GOING TO PITTSBURGH!”

With the cost of transportation, accommodation, entertainment, food and all other foreseeable expenditures covered, for the first time in a long time, the Murray family did not need to worry about a thing.

Scott, Joey, TJ, and Riley were in store for the trip of a lifetime as they prepared to travel to Pittsburgh, Pennsylvania.

Joey’s wish week was filled with fun: the boys were given the opportunity to cheer their team on in person at Heinz Field, meet the players, acquire an autographed football, snag a huge collection of “Terrible Towels,” and much more.

When asked about some of his favorite moments of the trip, Joey recalled playing catch with quarterback Ben Roethlisberger and talking about “kicking cancer’s butt,” with running back James Conner, who was diagnosed with Hodgkin’s lymphoma, a cancer that starts in the body’s white blood cells, in 2015.

Joey’s brothers were able to enjoy his wish just as much as Joey was; some of their favourite moments were playing arcade games at Dave and Buster’s and having dinner at Peppi’s Restaurant, home of the ‘Roethlis burger,’ named after the Steelers quarterback.

However, there was perhaps no one more grateful for this opportunity than Scott.

He recalled the joy he felt while watching his sons’ faces light up time and time again throughout the week.

Scott also commented on how grateful he was that they were able to enjoy the experience knowing that Joey was in remission, something that not every Make-A-Wish family can say: “We are five years past his diagnosis. We are so fortunate to be on a Make-A-Wish trip as a celebration.”

Our team at NLT is thrilled to see Joey’s wish come to fruition and excited to provide the funding to grant the wishes of many more children in the future.

* Photo courtesy of Make A Wish